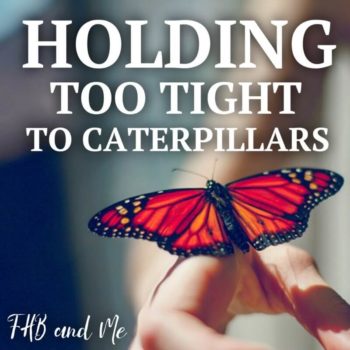 Holding TOO TIGHT to Caterpillars

‘I don’t like it,’ and she pinched her thin lips

-Mary from my great great grandmother’s book The Secret Garden

THIS was the exact posture and tone of a woman who made a beeline to me after seeing The Secret Garden Musical for the first time…except her lips were WIDE OPEN.

Her questions and concerns were not new to me…as I had heard them many times before.

“A love triangle…how could they? That wasn’t in the book! Aren’t you appalled?” she asked as I stood with a smile behind my memorabilia table, ready to answer questions about my great great grandmother.

Me at TUTS in Houston’s opening of The Secret Garden Musical.

“Appalled? Well…no”, I thought to myself, unsure of exactly how to handle her as she continued to steam.

At first, I was knocked back a bit by her angry tone and persistent complaining about the “liberties” taken with the story line. But as she continued her rant…without even a breath…I began to smile a bit inside. I smiled because I realized that she thought she was defending Frances. How sweet is that? I instantly loved her passion and heart for Frances and her characters and appreciated her defense of what she knew in heart heart to be the original and truest story.

Once I noticed she was slowing down, I quickly and gently inserted that I understood her concern…but that I was just so thrilled to be there that night where so many others who had just been inspired, once again, by the magical story of The Secret Garden.

I then said in my sweetest of tones, “My great great grandmother would have been glowing tonight about the performance…and so am I.”

When she realized I wasn’t planning to commiserate with her, she sulked off to her car…still complaining to her husband about this book-to-musical catastrophe. (in her eyes at least)

I COULD HAVE TOLD HER…

As she walked away I noted to myself:

I could have told her that Frances knew what it was to try and convert a book into a play. That she had actually done it several times, most notably with two of her biggest literary successes: A Little Princess and Little Lord Fauntleroy.

I also could have told her that FHB knew the process, the pains, and how the pace of the story sometimes must change in order to fit this new format.

I could have told her that Frances ALSO changed some of the story lines and characters from her own books when she made them into plays.

“Between the lines of every story there is another story,

and that is the one that is never heard

and can only be guessed at by the people

who are good at guessing.”

But the reality was...this sweet riled-up woman wouldn’t have listened, because her ears and heart were closed tighter than Mary’s lips in the beginning quote:

“I don’t like it,” and she pinched her thin lips more TIGHTLY together.

Then, my smile for her well meaning furry turned into sadness when I realized…she had completely MISSED IT. In all of her stewing and brewing about what IT wasn’t…she had missed the goodness and joy tucked into this refinished version of The Secret Garden Muscial. And to top it off…she missed Lily’s Eyes!

For those who love The Secret Garden book, you know that this woman was technically right. There is NOT a line anywhere that hints that the Doctor was somehow secretly in love with Collin’s mother Lily.

But the musical version, superbly written by Marsha Norman, not only hints at this unrequited love…but it culminates in arguably one of the BEST SONGS and scenes of the musical…”Lily’s Eyes”. (I might even might be willing to fight over this statement.)

This song makes me cry every single time. The first time I heard it was opening night on Broadway…featuring the voice of Tony Award Winner Mandy Patinkin…and I melted into a puddle. That is me on the left…17 years old and pre-Patinkin-puddle.

But this woman, and so many others who have read ANY book, loved it…and then seen the movie, play or musical versions…THEY ARE MISSING IT! With their fists clenched so tightly to the old…they are missing the beauty in these transformations.

This would be like holding on so tightly to the caterpillar that you aren’t willing to enjoy it today as a beautiful butterfly…a completely new “version” of itself.

THIS BEGS THE QUESTIONS:

OPEN your eyes, LET GO of the caterpillar,

and SEE the beautiful new musical,

movie, or person that is in front of you right now.

NOTICE IT for what it is today, LET GO of what it was before,

and EMBRACE THE BEAUTIFULLY TRANSFORMED BUTTERFLY!

P.S. While this is NOT the Mandy Patinkin version (I couldn’t find a good quality one)…this is a beautiful version of Lilly’s Eyes for you to hear. ENJOY!