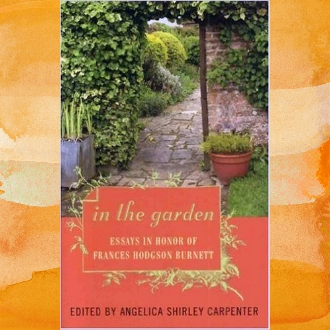 In the Garden: Essays in Honor of Frances Hodgson Burnett by Angelica Shirley Carpenter

Frances Hodgson Burnett, author of The Secret Garden, A Little Princess, and Little Lord Fauntleroy, was one of the most successful and controversial women of her time. Burnett’s flamboyant persona and unconventional lifestyle made her a contentious figure in Victorian society, and for generations after her death, her own family refused to acknowledge her. Burnett is best known for her children’s literature, but she began her career as a bestselling adult novelist. The themes of Burnett’s adult novels were often serious: working women, abusive marriages, and single motherhood, and for many years these novels have been overshadowed by the fame of her children’s books. Recently, however, scholars have rediscovered these works and have begun to study and write about them.

In 2003 at California State University, Fresno, Angelica Carpenter convened the first conference ever held about this famous author. Scholars, fans, and collectors gathered to contribute to the knowledge on the author and to discuss her accomplishments. The talks ranged from scholarly to conversational, covering Burnett’s books for both children and adults, the plays and movies that were made from them, the books they inspired, and the way in which the author’s life was reflected in her fiction. In the Garden: Essays in Honor of Frances Hodgson Burnettrecreates many of the conference talks, as well as other essays offering practical advice for collectors and the first interview ever published with Burnett’s great-granddaughter, who inherited the family archive.