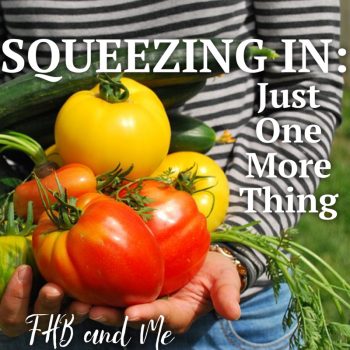 SQUEEZING IN: Just One More Thing

“Can’t thou smell it?

“It’s in a good humor

Like the earth, I too am in such a GOOD HUMOR these days. Spring is my FAVORITE time of year. Oh how I have planned and plotted out each and every box in my garden, waiting patiently for the perfect time to plant.

Frances loved gardens and planting things from an early age, but I haven’t always been one to love playing in the dirt. In fact, had you asked me 5 years ago if I was a gardener, I would have told you emphatically, “Nope, not me, I kill things. My mother is an amazing flower gardener, but sadly that green thumb skipped a generation.”

But when my kids began to grow up a bit, needing less of my time and attention, I felt this tug to nurture something calling from deep inside me…or perhaps the calling was really from the OUTSIDE.

My current over-the-top love affair with dirt began 4 years ago when my husband built me a small 10 X 10 vegetable garden for my birthday. I will never forget the day I loaded up my little red wagon at the Plant Haus with anything and everything I had ever wanted to see grow…and of course EAT.

I brought them home, planned out carefully what needed to go where, and dropped them lovingly into the fresh earth…

Ah…who am I kidding…I was too giddy to plan or read anything about the vegetables I was planting….I wanted these babies in the ground! So my strategy was this: I planted everything I bought randomly by what looked good where. And, if there was even a smidge of empty dirt still showing, I bought another plant and shoved it in there.

This photo was taken BEFORE the second round of plants were tucked into all the empty spaces.

“I’ll just add a couple more of these here…

and a few more of those over there.”

I thought, “It still feels bit empty, so…

I’ll just squeeze in one more thing right there.”

It looked glorious for a few weeks…until it all began to grow. And boy did it GROW! A wet spring had the seeds and seedlings maturing at break-neck speed, until they were so intertwined that I couldn’t tell one plant from the next.

It was a tangled mess, and so was I. Nothing I had planted was making the kind of vegetables I was seeing in the grocery store, giant worms were attacking my tomatoes, and other plants were dying a slow moldy death.

The worm that attacked my tomatoes and my first harvest: a melon the size of a small orange and corn with only three kernels. Garden 101: Epic Fail

I was overwhelmed and ready to give up when a friend kindly pointed out my problem.

Unknowingly, I had made the most common new gardener mistake: I planted too many things in a small space, giving my seeds and seedlings very little room to grow. This overcrowding caused a myriad of issues including a coordinated attack from an army of rolly pollies (pill bugs) who tried to take down the whole garden…all by themselves.

The only thing that could save my garden was some major editing. I had to rip out, and fast, the very plants that I had shoved into those empty spaces of dirt, so that the things I had first purposefully planted could not only survive but thrive.

Gulp. I hated this part, but I knew it had to be done. These were my babies, but it was time to make some difficult choices about who I would keep and who needed to go.

So I began to hack away at it bit by bit, pulling up this and cutting down that, until there was finally room again for each plant to breathe.

“Mary did not know anything about gardening, but the grass seemed so thick in some of the places where the green points were pushing their way through that she thought they did not seem to have room enough to grow. She searched about until she found a rather sharp piece of wood and knelt down and dug and weeded out the weeds and grass until she made nice little clear places around them.

“Now they look as if they could breathe,” she said.”   The Secret Garden

When I finally stopped and stared down at the rubble left at my feet, I realized that this garden was just a reflection of what was happening in my own life.

The pile left at my feet that reflected my life.

I had fallen for the biggest lies of all:

That a Busy life was a Better life.

That More was always Better.

That Space in my schedule meant I wasn’t doing my part.

And that if I squeezed this one additional thing into my life/schedule,

that perhaps I would finally be enough.

*Sigh.* Is anyone having a “head bob” moment right now?

Have you believed these lies too?

I had been so quick to cover up all of the empty spaces in my days, that my life had grown out of control and my dreams were buried. I was being choked out by the very things I had purposely planted there and I was being attacked by anxiety and exhaustion bugs from all sides.

Something had to give if I wanted a chance to not only to survive, but to thrive.

Do you have this same insane urge to fill up every empty space on your calendar? And then when you do, are left gasping for air and overwhelmed beyond belief?

Here is what I learned that day in my garden:

And finally…and this one is BIG:

Are your dreams buried too? What can you pull out of your days to make some space for growth in your life? Wouldn’t you love some room in your days to just breathe? Make it happen. Dig In. Create Room.

Wishing you room to breathe in your day,

P.S. As a reminder to BREATHE, I am loving this song right now. The lyrics: Breathe it in, Let it out, Settle Down…have become a place of refuge for me when my garden and life get out of control. I think you will love it too!