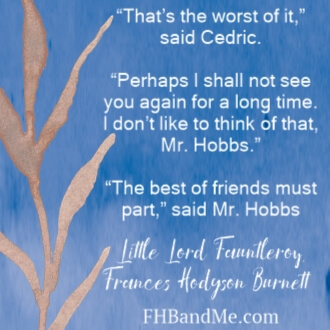 “That’s the worst of it,” said Cedric. “Perhaps I shall not see you again for a long time. I don’t like to think of that, Mr. Hobbs.”

“The best of friends must part,” said Mr. Hobbs

10 years ago this Summer, I backed our box-stuffed minivan out of my parent’s driveway, as I watched my mother crumble into a pile of tears. I am sure she was thinking the same thing Cedric was when he was told he was moving away from his friends in America to live with his grandfather in England.

Her baby girl(and best friend), 9 week old granddaughter, 3 year old grandson, and son in law were leaving her, or so it seemed, and moving southwest to the Texas Hill Country.

Fear was written all over her face, but I was somehow quietly confident. Perhaps it was the raging postpartum hormones that counteracted any real emotions I should have been feeling, but I don’t think so….not this time.

Months earlier, my husband Patrick had been stuck on the highway for hours because of an accident. He arrived home beyond frazzled and fed up to proclaim, “I don’t want to live here anymore.”

The accident was just the boiling point that had been building inside of him for some time. He loves the outdoors, and before having kids would spend most of his weekends at the hunting lease outside the city hunting pigs, ducks, deer, and sanity. I would even go so far as to call the outdoors his “church”. He would go for a night, an afternoon, or a day, and come back refreshed and full of energy to take on the week.

But once kids came, by choice, Patrick spent more time at home, and became trapped a bit by the concrete jungle, his demanding job, and duties as a new father.

I could see it, the slow bubble of discontentment and restlessness that started as a simmer, had now become a full on rolling boil. And the steam…was the energy we needed to do something about it.

My husband is an “idea guy”, an entrepreneur at heart, so he is always talking about great ideas, and “what if’s”.  I love to listen, give input, and banter about them, but I rarely take them too seriously until the what if’s turn into when’s.

She kept asking me why, as she searched for some way to rationalize our move. At first, I couldn’t really articulate it…I just knew he needed to be there, and I was going to support it.

Then, I was singing along to The Secret Garden Musical in my car during my morning commute, when the words of this song came belting out of my mouth as if I was hearing them for the first time. I had sung the words a million times before, but I hadn’t really connected with them in this way before. Somehow this song called Wick, perfectly summed up why I was leaving Dallas and moving to the Texas Hill Country.

The term Wick means “alive” in old Northern English dialect. When you see a dead branch in the winter, you can tell if it is wick by scraping away a little of the bark to see if there is green inside. If it is green, it is WICK!

I sang out, “When a thing is Wick it will grow”, and knew:

Patrick couldn’t grow into the man God was calling him to be in this city soil.  His roots didn’t have “room to grow” and the buildings hid the sunshine from his face.

My favorite line in the whole song became my rally cry during the hard times of the move:

“You give a living thing
A little chance to grow,
That’s how you will know
If she is wick, she’ll grow.
So grow to greet the morning,
Free from ground below.
When a thing is wick,
It has a will to grow and grow.”

This move was his “CHANCE TO GROW”.  And boy has he bloomed here in this hill country soil! But that’s a story for another day.

And, my mother survived our move and soon after she and my father moved just a few miles down the road from us to their forever home by the river.

In honor of our Hill Country Move-iversary, I want to remind myself and you that:

We are all WICK inside, even when we might look dead and frazzled on the outside.  Sometime we just get covered up in the weeds that grew up around us when we were just too tired to pull them off. Other times, long droughts of loneliness can send our roots searching in the wrong direction for nourishment and love.

BUT…If you pull out the weeds, give your roots room to grow, feed your soul with sunshine and nourish your mind and body with good things…YOU WILL GROW and GROW!

But you have to give it a chance. You can’t find sunshine if you lock yourself away from others in the dark. You can’t dance in the rain if you are too afraid to get wet. And you can’t find good rich soil to grow in if you aren’t willing to get your hands dirty.

You see, I only thought we were moving for my husband to grow, but turns out…my roots needed this country soil too. My soul has bloomed here, my creativity reawakened after a long dormancy.

So get out there! Be your own sunshine! Play in the mud! Or maybe today you can be the Sunshine someone else needs today, or that nourishing drink of kindness or affirmation that will start their first leaf bud blooming.

Take a listen below to the song Wick…perhaps it will inspire you too!

Do you have dreams that look dead, but are just waiting for you to come “wake them up”?

Have your weeds gotten so unruly in your life that you can’t see your passion anymore?

Tell us about it!