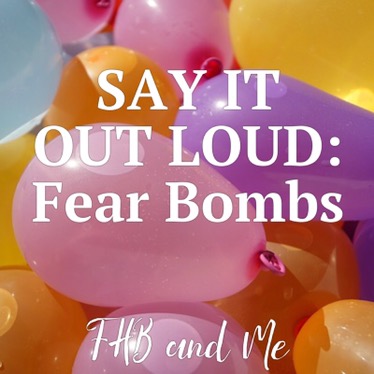 SAY IT OUT LOUD: Fear Bombs

“
He had never told any one but Mary
that most of his “tantrums”, as they called them,
grew out of his hysterical hidden fear.”
-The Secret Garden

It can be paralyzing. While some fears prevent us from falling off cliffs, other fears can keep us from jumping into that very thing in life that we were made for— if we let the fear take hold.

Wanda Kid, author of I Will Rise challenged me through her writing today to:

“Let Go of Fear and Walk into a Fuller and more Courageous Life!”

This challenge and it’s timing hit home for me, as I’ve spent the last few weeks planning 2017 and pondering some words to capture my intentions for this year. One phrase that keeps coming up is “GO BOLDLY*.”

I love the “marching forward” tone…and the confidence and fearlessness of the phrase. It’s just the thing I need to keep this writing dream on track.

Let’s do this, I thought of Wanda’s challenge.

Yes, I did admit in last week’s blog that perhaps I am a little afraid of fun, but generally I am NOT a fearful person. I typically speak my mind, stand up for myself if challenged, can tell people no, and can kill a spider all by myself without screaming. I don’t sweat the small stuff and give the big stuff to God.

Outwardly I am a rock.

But on the inside, sometimes, I can turn into a “full on wimp” letting thoughts, “mere thoughts” as Frances called them, take me down for the count! And fear can fester up in your head if you don’t let it out.

In December of 2000, I ran my first marathon.  My friend Lisa and I put in the training, running side by side for hours at a time. During each run, we would spend our time talking, playing I-Spy games, singing lines to songs, anything to keep our feet moving and minds off our tired legs and the miles ahead.

But on race day…we ran the entire 26.2 miles together in complete silence. Not. One. Word.

So, instead of being distracted by our back and forth chatter for 5 1/2 hours, my mind became locked in a cycle of fear. Fear of stopping…fear of letting her down if I did…fear of telling her how scared I was for fear “my fear” might lead her to want to quit.

As I write these words…my internal self just screamed “Stop the Insanity!”  If only this voice would have shouted a bit louder that day. Because, instead of letting out my FEAR BOMB by telling her I was scared of failing that day, I kept my mouth shut while slowly…internally…combusting.

We crossed the finish line and I stumbled into my husbands arms, sobing the words, “No matter what I say in a few days, don’t ever let me do that again.”

I was emotionally raw and physically exhausted. Not only had I just run 26.2 miles, I did so while silently going 26 rounds in the boxing ring with my fears. And Rocky Balboa…I am not.

And after I gathered my composure…then, and only then did I say the words…“that sucked” to my friend Lisa. She immediately nodded in agreement.

But honestly, it wasn’t the grueling miles that sucked so bad (although I am pretty certain that somewhere around  mile 22 my body began eating itself), it was the the loneliness I felt being afraid…all by myself.

“… surprising things can happen to any one who, when a disagreeable or discouraged thought comes into his mind, just has the sense to remember in time and PUSH IT OUT…”

The “surprising thing” that happens is…as soon as you open your mouth and say it out loud…it LOSES it’s POWER! And because you are no longer alone in your fear, it’s now a 2 on 1 battle— and that is a fight you can win!

And as our muscles began to freeze up and the reality of what we had just done settled in, we spoke about our internal fears that were brewing during the silent miles of that day. Turns out, she was thinking exactly what I was thinking. I was NOT alone in my fear after all.

YOU ARE NOT ALONE

We just have to get to the point where we understand

it doesn’t mean that we can’t also be brave.”

I became convinced recently that BRAVEry and BOLDness are contagious as I watched 17 women in a Live Your Legacy class become infected this Fall. We were virtually strangers, most had met for the first time just a day or two before when we arrived at Lucky Star Art Camp, ready for some creative nurturing.

The class began with the instructors asking us to share with the person sitting next to us and then the entire group the following information:

My heart immediately went into my stomach and fear began to spin around in my head.  But guess what…I wasn’t the only one afraid.  I heard others say,”Man this is going to be hard, I’m scared to share.” Then my new friend sitting next to me leaned over and whispered….”You are going to have to tell my ‘overcoming moment’…I just can’t say it out loud yet, I’m not ready.” I nodded, happy to be brave for her…while secretly hoping that it might get me out of sharing mine.

But then something happened. A brave and bold camper volunteered to go first and share. She was shaking, tearful, and incredibly honest. And then another shared. And another. It was as if each one said…”well if she can share, I can do it to.”

When the time came for my new friend to go next. She looked to me as I nodded gently to her “you can do this” without saying a word. Her brave and bold words tumbled out first as a trickle…and then a steady stream…saying out loud this thing she had held captive in her thoughts for far too long. And when she was done…we all watched as she breathed in a fresh breath of relief and let out a sigh of peace. The fear was out.

There is POWER when we share our inner struggles and fears with each other.

And even Mary found that when she began sharing with Colin about her ‘secret’ garden, “it was so easy and safe to talk about it that she ceased to be afraid.”

So today, I have decided to share a few of my current fears with you so I can get them out of my head and GO BOLDly into 2017 without fear (ok…with less fear).

In the immortal words of my husband on stage during my Ice Ice Baby karaoke rap in New Orleans….”BOOM!”

In this world of Facebook we are all sharing our joys, but sometimes it just takes one of us to share our fears to make it OK for the rest of us to say ours out loud too. So drop the bomb on fear and SAY IT OUT LOUD!

Going Boldly into 2017 together,

P.S. *GO BOLDLY was inspired by this verse in my journal time: “Let us therefore come BOLDLY to the throne of grace, that we may obtain mercy, and find grace to help in time of need.” Hebrews 4:16

LET’s CHAT ABOUT IT

What are you afraid to say aloud?

Anything have your head spinning these days? Get it out!