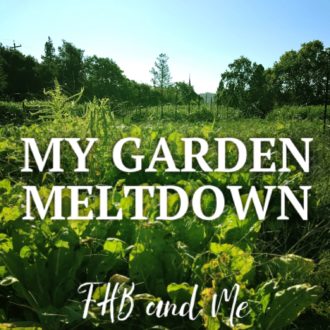 – King Amor, The Land of the Blue Flower by Frances Hodgson Burnett

One of F.H.B.’s lesser known books was a fairy tale of sorts called The Land of the Blue Flower. This sweet story for all ages makes a BIG point, taking less than one full watering of my garden to complete. (59 minutes to be exact for the audio book)

The king uses a blue flower to illustrate his belief that,

I actually listened to this book for the second time, after noticing a blue flower poking its head out on my overgrown garden beds. Its appearance was timely, only days after my own wrestling match with a nasty negative thought.

Ugly thoughts are sneaky little suckers…striking many times in places you had assumed were safe zones.

Recently, I let a big one creep in as I watered my garden. The garden is usually my happy place, a sanctuary of rest and my playground of growing-things-goodness. So I was caught off guard when the negativity began to take hold.

The ugly thought started as just a whisper while I watered:

You Keri, are a failure.

What? The truth is, my garden IS out of control. I am honestly not sure when it happened and if I gave up on it, or perhaps if it actually gave up on me. Yet it is still MY garden, a disaster zone that I dutifully water by hand each day…for an hour. Note to self:  One hour is a long time to stare at your garden that seems to have one foot already in the grave.

You are a failure Keri, just look at this garden.

Could it be true?? The tomatoes covered in bugs were echoing the ugly thought, the eggplants and their yellow leaves were shouting it too, and the weeds that had grown as tall as my okra plants didn’t even have to say a word…they just glared at me knowingly.

Each day I watered, this same ugly thought came back again and again like the infuriating little mockingbird who takes a small bite out of ripe my tomatoes each day. The tenacious spirit of this bird and the ugly thought were wearing me down.  And then somewhere in that repeating, I started believing.

The ugly thought grew louder each time I entered my garden door, but crossed the final line when it followed me into the house.

You even FAILED to eat the vegetables you have spent precious hours watering!  See, you ARE a failure Keri.

When I cracked the fridge door open, the light shined brightest on the drawer full of recently harvested cucumbers who were lined up in a row, peering at me from under their blanket of mold. *Sigh. I could just hear their earnest disappointment in not becoming the sweet and sour pickles they were meant to be.

As the chorus rang out inside my head again, “You are a failure…”, I drank it in and began to list in my head the other things in which I was possibly failing. I wasn’t far into my list when something suddenly snapped inside and my defenses kicked in, sending this overachiever into hyper-drive.

“I’ll show you Ugly Thought…watch this!”

Then without making eye contact with a soul in my house, I spent the next two hours cleaning out the fridge, chopping and cooking every lingering vegetable on the brink of death.

Then just to prove once and for all to that ugly thought that I am NOT a failure…I baked a loaf of bread.

I had gone so head down into prove-myself-mode that when I was done, it felt a bit cathartic, but mostly foolish.

Do you do this too?

When it looked like I was winding down from my Take That Tornado, my husband felt safe enough to pull me aside and ask what on earth was going on.

I looked up with tears streaming down my face and said,

“I have been watering the garden all week, staring at all the work that needs to be done, and the dying things, and the weeds, and I can’t think of anything now while I am in there except what I failure I am. This was a place of joy. “

I am mad that I turned something that was feeding me

into something that is now eating me.”

You see, my garden was built 5 years ago, in the peak of my GO BIG or GO HOME years, when I was trying desperately to prove to myself and everyone around me that my former employer had made a mistake when they let me go. When I lost my job, I thought I lost my identity, and my heart hurt in a way that I couldn’t even articulate. And to cover up that hurt, I buried myself under a mountain of busyness and spun off Take That Tornadoes all along my path.

And even though I have worked diligently to pull off those weeds of busyness and create a new identity that does not rest on a particular job, I still have this insane compulsion to continue planting all 900 square feet of my way TOO BIG garden, setting myself up each season for certain failure.

While watering this week, I realized the ridiculousness of continuing to take on this garden in the same way as before. I am not that person any more. This is a new season for me, and this garden and the way I have managed it is no longer working.  It’s time for a change.

Do you have things you are still doing, wearing, or harvesting that no longer work for the season you are in?

A CHANGE  IN PERSPECTIVE

In order to find happiness again in my garden I must change my perspective. The reality is…there will always be bugs, weeds, and random dying things in my garden. So if I choose to focus only on them, I am doomed no matter how big or small my garden becomes.

So it is time to FOCUS ON THE GOOD!

King Armor in The Land of the Blue Flower knew this secret when he said,

And this same idea is echoed in The Secret Garden:

“Two things cannot be in one place.

Where you tend a rose, my lad,

But somehow, I was so focused on the bad…that I had completely missed ALL of the good.

THE GOOD INSIDE MY GARDEN:

And as I entered the garden those next few days, with eyes searching for good instead of laser focused on the challenges, I noticed three days in a row that sweet hummingbirds were drinking from my flowers. I had NEVER seen them before.

If you have negative thoughts floating around in your mind or garden, I challenge you to fill them instead with BEAUTIFUL THOUGHTS and seeds of positivity this week, giving the “negative Nelly’s” little to no room to fester.

Sending You Each An Abundance of Blue Flowers and Roses,

P.S. This same sweet man, my forever husband who held me tight after my Take That Tornado, got up early and watered my garden for me the next morning. Best. Guy. Ever.