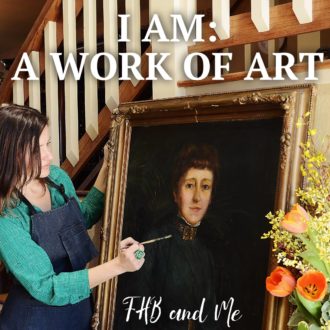 “The walls were ornamented with colored lithographs of moon-faced houris,

with round eyes and round, red cheeks, and wearing low-necked dresses,

and flowers in their bosoms, and bright yellow gold necklaces.

These works of art were the first things which caught Ferrol’s eye,

and he went slowly up to the most remarkable, and stood before it,

REGARDING IT WITH mingled WONDERMENT AND AWE.”

What if we looked at ourselves and regarded our lives with this same wonderment and awe?

Today’s blog was inspired by Lisa Field, a fellow chicken lover and garden digger, who is the director and founder of Lucky Star Art Camp for women…and a core member of my friend tribe.

She was writing recently about what she hopes each camper will leave with after a week at Lucky Star when she said this:

“I want for them, with all that I’ve got, to begin thinking of themselves as a Work of Art. Something to be prized, something truly special, something that gets even better with time.”

When I read these words…I actually audibly shouted, “Yes!!!”

What if we all stepped back and viewed ourselves today as a WORK OF ART?

Could we begin to see ourselves and our lives as individual Masterpieces-in-Progress…instead of something that needs to be finished, be perfected, be corrected, or be as good as the other artists, moms, friends, or wives we know?

I just love this idea, because the one thing every artist will tell you, is that even though they may stop working on a painting or project, it is never really finished. There are always things they want to do, change, highlight, cut or chisel off of their projects.

Frances also spoke about how her stories…her art…were never “really’ finished either. She said that as soon as she would publish something, she would simply be walking down the street and minding her own business, when new characters would enter her mind asking, sometimes begging…to “please be written into the story”.

As a matter of fact…her famous story A Little Princess, was originally published as Sara Crewe when new characters such as these came to call. Well…I’ll let FHB’s forward to her faithful readers below explain how this came to be.

Forward found in the first few editions of A Little Princess.

The Whole of the Story

“I do not know whether many people realize how much more than is ever written there really is in a story-how many parts of it are never told–how much more really happened than there is in the book one holds in one’s hand and pores over. Stories are something like letters. When a letter is written, how often on remembers things omitted and says, “Ah, why did I not tell them that?” In writing a book one relates all that one remembers at the time, and if one told all that really happened perhaps the book would never end. Between the lines of every story there is another story, and that is the one that is never heard and can only be guessed at by the people who are good at guessing.

The person who writes the story may never know all of it, but sometimes he does and wishes he had the chance to begin again.

When I wrote the story of “Sara Crewe” I guessed that a great deal more had happened at Miss Minchin’s than I had had time to find out just then. I knew, of course, that there must have been chapters full of things going on all the time; and when I began to make a play out of the book and called it “A Little Princess, ” I discovered three acts full of things. What interested me most was that I found that there had been girls at the school whose names I had not even known before. There was one little girl whose name was Lottie, who was an amusing little person; there was a hungry scullery-maid who was Sara’s adoring friend; Ermengarde was much more entertaining than she had seemed at first; things happened in the garret which had never been hinted at in the book; and a certain gentleman whose name was Melchisedec was an intimate friend of Sara’s who should never have been left out of the story if he had only walked into it in time. He and Becky and Lottie lived at Miss Minchin’s, and I cannot understand why they did not mention themselves to me at first. They were as real as Sara, and it was careless of them not to come out of the story shadowland and say, “Here I am,–tell about me.” But they did not-which was their fault and not mine. People who live in the story one is writing ought to come forward at the beginning and tap the writing person on the shoulder and say, “Hallow, what about me?” if they don’t, no one can be blamed but themselves and their slouching, idle ways.

After the play of “A Little Princess” was produced in New York, and so many children went to see it and liked Becky and Lottie and Melchisdec, my publishers asked me if I could not write Sara’s story over again and put into it all the things and people who had been left out before, and so I have done it; and when I began I found there were actually page and pages of things which had happened that had never been put even into the play, so in this new “Little Princess” I have put all I have been able to discover.”

I just LOVE her wit…especially how she accuses these characters of being idle and slouching for not showing themselves sooner. She is too funny!

COMMITTING TO THE PROCESS of YOU

Being a work of art takes time, patience, and perseverance because…it’s a process…an ON-GOING, NEVER-ENDING process. I know this now, but somewhere years ago I bought into this lie that by now, in my forties, that I would be or should be complete.

Did you fall for this lie too?  Now that you know the truth…are you committed to the process of you?

Frances was committed to the process with her art…her books, essentially writing and publishing this story three different times, while admitting that the final version of A Little Princess was STILL only as complete as time would allow. And we, my friends, are the same. We are only as complete as the time we have been given until now.

I love how Crylstal Hurst puts it in her blog Believe in the Idea of A Masterpiece:

Photo by Chrystal Hurst of www.incourage.me

“As any artist will tell you, the key to creating a wonderful work of art is to be committed to the process. Beautiful creations take time. Sometimes they can be messy. And the artist often wrestles with how to produce a winning representation of what lives in the heart, mind, and soul.

The same is true for you. The key to living your beautiful life is to keep going. You must decide not to get hung up or stuck. Don’t get bogged down in the mess that comes with making a masterpiece. Choose to wrestle for the win.”

Friends…I AM a WORK OF ART, FHB was, and you are too! So get out your 64 count box of CRAYOLA crayons, put on your patience pants (we should all get a pair of these) and get to work on YOU…your greatest Masterpiece!

JOIN ME THIS YEAR AT LUCKY STAR ART CAMP

Have you ever wondered what it would be like to go to summer camp as a grown-up? Are you feeling like you’re due for an adventure? Registration is now open for Lucky Star Art Camp 2017! It’s happening November 1-5 and it’s for women of all ages. Come do your thing, make new friends, and rekindle your spark in the beautiful Texas hill country! Learn more today by visiting their website at www.luckystarartcamp.com.

Lucky Star is a women’s art and whole living sleepaway camp held annually on the banks of the Guadalupe River in the Texas hill country. See below for just a taste of why I am ALWAYS talking about Lucky Star!

P.S. Read more about seeing ourselves from a HIGHER PERSPECTIVE in our blog RECOGNIZING YOURSELF:

Don’t miss a single blog from FHB and Me!

Enter your email below to have them sent right to your inbox each week.