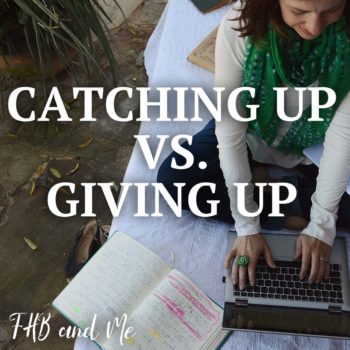 Catching Up vs. Giving Up

“He thinks if you should give him time

he could CATCH UP again.”

Did you set a goal or perhaps make a resolution for the new year? Did you set goals that would help you to be heathier, smarter, more spiritual, productive or some better version of you? Did you commit to eat better, run 3 times a week, read 20 books, or any number of things with great enthusiasm and the best of intentions?

How is it going? Are you rocking your goal and on track to succeed? If so, good for you!

For those of you who are struggling, falling behind, and ready to give up…today’s blog is for you…AND ESPECIALLY FOR ME!

INTENTIONS BEHIND THE GOAL:

To get myself writing regularly AGAIN.

GOAL STATUS AS OF WRITING THIS BLOG:

I have only managed to write for 4 hours a day…

BEHIND…”AGAIN” and Ready to Give Up

This is a familiar place for me..and it seems I am not alone. And while I hate leading with a negative, I think knowing that we are not alone in our struggles is SO IMPORTANT! So…here we go:

According to Statistics Brain, of the 41% of Americans

42% GIVE UP on their resolutions each year.

I have been in that 42% Quitters Club more times than I can count. And it is probably because I set BIG goals, but fail most of the time to consider whether they are actually realistic for me in this season.

“4 hours for 40 days has a nice ring to it,” I thought…so I ran with it.  And this quick-to-just-run-ahead reaction is what typically buries me under the stress to JUST DO IT…until I just don’t and quit.

And quit I do, because I am an all or nothing kind of girl. I am either on a diet…or eating as though I’m on vacation. I’m either exercising regularly…or not moving off the couch. My garden is either lush and thriving or mostly dead. And of course, I’m either writing or I am doing everything else but. You get my drift.

For this reason, when I am struggling with my goals I see only two choices:

But this week, as I sat stewing over my lack of progress on my 4 for 40 goal, my mind began to stir.

What if those weren’t the only options?

What if we could chose to CATCH UP instead of GIVE UP on our goals?

And what if we had the POWER TO CHANGE the goal completely,
as many TIMEs as necessary,
to fit our current intentions, season, and strength.

This idea of “catching up” came to me when I also fell behind on a “Seeds of Spring” devotional that I had started to coincide with my 40 days of writing goal. I thought it would be a great motivation and inspiration for my writing, but it too became just another thing to fall behind on.

There it was, my failure, in black and white, staring back at me from my phone screen: 2 Missed Days.

I sighed heavily, knowing I did NOT have the time or energy it would take to get those 2 days done plus today’s in order to get back on track. Then my heart began to race, knowing that those days missed would continue to pile up…just like the laundry I have put off folding for the last three days.

Then, just as full-on panic had set in, I noticed the little button on the left in green that glowed like a beacon in the night, whispering directly to my quitters heart these three simple words:

The green button didn’t say: “Read all weekend and skip the fun you had planned”, or “You should feel guilty”, or “You are too far behind, so why don’t you just quit!” (But this IS what my heart says when I fall behind on meeting a goal.)

It simply has a green button you can click (as many times as you want) and it will “Catch you Up!”…shifting the days back as far as you need…getting you back on track.

Hip, hip, HORRAY, there is a third choice! We don’t have to GIVE UP, we can simply CATCH UP.

My friend Leslie always says, “Wherever you are, you are perfect and fine.”

And here is another truth: YOU ARE, WHERE YOU ARE. (let that one sink in)

And whether you are 12 days behind, 12 pounds behind, or 12 whatever’s behind…I feel certain that you and I are exactly where we are supposed to be. So, let’s start again there. Let’s CATCH UP this time and as many times as we need to…and not GIVE UP. Let us all choose to persevere and QUIT the Quitter’s Club for good.

What if we had the POWER TO CHANGE the goal completely,

as many TIMEs as necessary,

to fit our current intentions, season, and strength?

…well, WE DO, but that is a blog for another day. So stay tuned!

Until then, Catch You UP and Start Again…Right Where You Are!

P.S. If you find yourself in the Quitter’s Club often too, check out one of the very first blogs I ever posted below. 🙂