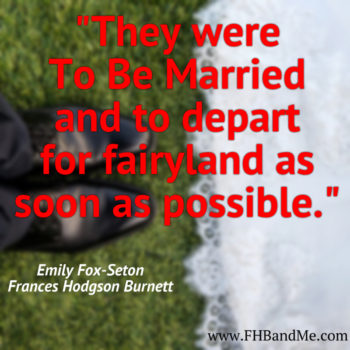 “They were to be married,

and to depart for fairyland

as soon as possible.”

October is my anniversary month with my

18 years of marriage, plus 5 years of dating mean we have been together a long time. Now, unlike the quote from Frances’s book above, we have not lived in Fairyland. We live and love right here in the real world where time flies by instead of fairies. We met in college and have lived a life full of adventure since.

Frances, to the contrary, was married and divorced twice. True love, besides that for her children, seemed to elude her. So she escaped to “fairyland” daily by writing books for adults with stories about love and relationships like the two part story of Emily Fox-Seton: Being the Making of a Marchioness and the Methods of Lady Walderhurst. Some of you may have seen the PBS movie based on this love story called The Making of a Lady.

she said when thinking of her engagement.

After 23 years together, I too still can’t believe it’s true:

To so much more!  And recently his YES took my breath away.

And the first thing I did, as usual, was word vomit all over him about my 4 days away.

But this time was different. It wasn’t my normal show and tell of “I made this” combined with stories of who did what crazy funny thing by the campfire and the usual run down of the amazing food at camp. (We own a restaurant called Grape Juice so food is always a topic of discussion…and the food at Waldemar is top notch!)

I don’t think any of those were even mentioned before I just blurted out:

Now I had been telling him about the idea of FHB and Me before camp, but it was still in that…someday category. “Someday I would chase my dreams to be a writer.”

But when he said “Do it” with such confidence and no hesitation, I thought he must not really understand what I meant.

So I began to qualify what I said by rambling on about really taking this seriously, letting go of all of my civic involvement and reducing my time at our restaurant so I could “really do this”. Then he said it again as calmly as before.

“Really?” I said again thinking he still must not understand.

Seeing the look of confusion on my face and tears in my eyes he repeated himself again, this time looking me in the eyes and holding my hands, “Yes, do it Keri.”

HE SAID YES…Even though I had only written one paragraph since high school.

He SAID YES...Even though he hadn’t read a single word that I had written except our silly daily texts.

He SAID YES…Even though I had said Yes to WAY too many things in the past, burying myself under piles of yes’s and obligations.

and He still said Yes.

I like to think he said Yes because he knew what I knew:

this was going to be an adventure of a lifetime.

One that if you don’t say YES

and jump in deep you will regret it…

and forever be looking over your shoulder

at that one that got away.

Cheers a Lifetime of saying Yes to those things that call us,

Let’s Chat About It:

What are you saying Yes to?

Too many things…or THE THING?