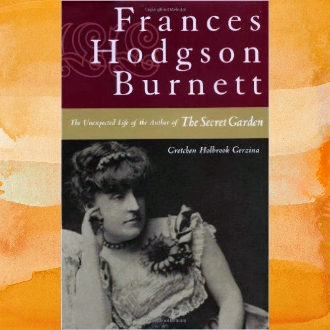 Frances Hodgson Burnett: The Unexpected Life of the Author of The Secret Garden by Gretchen Holbrook Gerzina

Hugely successful in her own time for adult novels and plays, Frances Hodgson Burnett (1849-1924) would be astounded to find out she is remembered for a handful of books for children, but most of all for the enormously popular Secret Garden. This fascinating biography-the first to have the full cooperation of Burnett’s descendants and relatives-examines her life with lively intelligence, sensitivity, and fascinating new, never-before-published material.

Burnett’s life was full of those reversals of fortune that mark her work. Following modest beginnings in mid-Victorian Manchester, she arrived in post-Civil War Tennessee at the age of fifteen with her widowed mother and two sisters. Burnett was the breadwinner of the family from the age of seventeen, eventually publishing a total of fifty-two books and writing and producing thirteen plays. She made and spent a fortune in her lifetime, was generous and profligate, yet anxious about money and obsessively hardworking.

Constantly restless and inventive, Burnett’s personal life was as complex as her professional one. Her first marriage to a southern doctor disintegrated as a result of her notorious flirtations and a scandalous affair, and her subsequent marriage to an English doctor turned actor suffered a similar fate. She understood the intensity and loneliness of the thoughtful child, but was herself a largely absent mother of two sons-overwhelmed by guilt when tragedy struck one of them; the other one never got over being the model for Little Lord Fauntleroy.

A woman of contrasts and paradoxes, this quintessentially British writer was equally at home in the United States, which honored her with a memorial in Central Park. Frances Hodgson Burnett reinvented for herself and for generations to come in both countries the magic and the mystery of the childhood she never had.