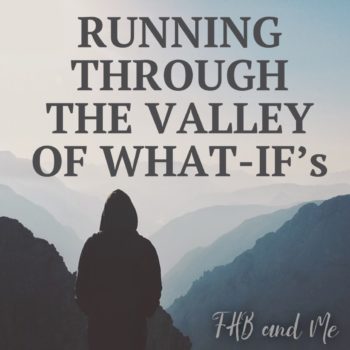 Running Through the Valley of What If’s

“WHAT IF we don’t find him—

don’t find the right one, I mean!”

Recently, I found myself buried under the covers and barricaded behind a giant pile of pillows, all because I let a trip through the “Valley of the What-If’s” hold me hostage.

Here is how it all played out…

I had just begun to doze off to sleep when the phone rang. My husband  answered it while I held my breath, waiting for his tone to give me ANY hint as to what this mysterious late night phone call was about.

The call, as it turns out, was from our alarm company who had just received a signal that indicated that the alarm panel at our restaurant was being tampered with at that very moment.

Mere seconds after hanging up my husband was dressed and out the door to investigate first hand what exactly was going on.

And as soon as I heard the door slam behind him…my head began to spin:

“Tampered with?” I thought.

“Who would tamper with our alarm panel?”

Then, just one sentence in…all rational thinking began to disappear as I wandered straight through my sleepy fog and into the Valley of What-If’s. (said very dramatically, perhaps even with an echo effect, and followed of course by the sound effect for impending gloom and doom…”Dun…Dun…DUUUUUN!!!!”)

Have you been to the Valley of What-If’s before? You know the place I am talking about! It’s just down the hill from the Mountains of Despair and the Cliffs of Insanity.

Most days you can get there faster than lightning when you ATTEMPT to guess the future.

My regular trips to The Valley typically begin with a simple:

What if this happens? or What if that happens?

But then…THEN enters into the equation, which usually is the final catalyst that sends me flying off the Cliffs of Insanity head first.

What IF the alarm panel got struck by lightening and THEN all of the wiring has to be replaced?

What IF that cost’s thousands of dollars and THEN we can’t pay for the kids to go to college?

What IF they kid’s don’t get to go to college and THEN they turn to a life of crime?

It’s absurd AND irrational…you get the point.

So this particular night….although I had no idea what was actually happening as my husband drove the 20 minutes down the road to investigate, my mind had already imagined (and in many cases consecutively believed) over 20 different and mostly worst case scenarios ranging from general maintenance issues…all the way to, dare I admit it, an alien invasion. (no more late night TV for me)

But here is the deal: even though I knew it wasn’t aliens…this fear, that was built up in my heart about this very real “unknown”, had me in a virtual choke hold.

I felt like I was that 8 year old little girl again who had just seen the shadow of the tree outside my window being projected onto my wall. I vividly remember laying as still as I could in bed, paralyzed by the fear that the body that was buried in our side yard had suddenly come back to life. (You can thank my older brother Matt for that fun nightmare, as he convinced me that the black weed blocking cloth I saw peaking out from under the mulch was a body bag.)

Ya’ll, FEAR is a crazy thing.

It will knock you down without even throwing one punch.

The fear that night had me:

Did I mention that I am a 44 year old, typically rational, and a mother of two?

Then phone I had clenched in my hand rang and just like that…the alien invasion was over. My husband said the three little words I had longed to hear, “All is well.”

Almost instantly, the absurdity of my time in “The Valley” became so clear that I grabbed my phone to begin writing this blog…because writing how I process life.

WHAT I LEARNED ON MY TRIP TO THE VALLEY

Playing the “What-If’s” is a game.

And I need to remind myself…

that in this dangerous hypothetical game…

I am the ONLY loser.

Friends, I love to travel, but this is one trip…I do NOT recommend you take. (Perhaps I should post this on Travelocity)  At all costs, do your best to not let fear run you directly into the valley of What If’s, or over the Cliffs of Insanity and up the jagged the Mountains of Despair.

Stay rooted instead in the land of reality, where things actually ARE what they seem to be.