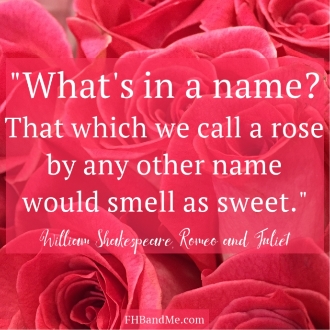 That which we call a rose by any other name would smell as sweet.”

When I was headed off to college, one of the best pieces of advice someone gave me was this:

“Get to Know Your Professors BY NAME”.  Go in, talk to them, ask them questions about your assignments, get to know them as a person and let them get to know you a bit. Because when they KNOW YOUR NAME…they are more likely to help you, when you need it most.

In class sizes of just 20 or 200, this bit of wisdom was a lifesaver for me. And it’s great advice no matter what season of life you are in: at work, in school, at church, social settings, and more.

Because when you get to know someone BY NAME, deeper than just a passing head nod of recognition, it changes things. You become invested somehow in them and they in you.

I plan to share my great-great-grandmother with you on this deeper level, so when you “Get to Know Her BY NAME”, you not only become invested in her, but also, that her words can then be invested back into YOU.

When I mention to people who my great-great-grandmother is, most recall her books, The Secret Garden, Little Lord Fauntleroy, or A Little Princess, but not often do they remember her name. I’d like to change that and begin this getting-to-know-her journey with just her name:

We called her FHB around the house growing up because to say her full name: Frances Hodgson Burnett….was ridiculously LONG. And I don’t know about your house, but we were lucky for my mother to even call us by our actual name. She would typically go through the names of both my brothers and the dogs before she landed on mine.  “Tad, Matt, Keesha, Candy, Cricket…KERI!” she would yell.

Therefore, to say the full FRANCES HODGSON BURNETT, was just out of the question. So FHB it was.

For one woman…Frances had a TON of names depending on her role:

She was born: FRANCES ELIZA HODGSON.

My grandmother, her grand-daughter, called her: NANDA.

My great-grandfather, Vivian, her son, called her: DEAREST.

Other relatives called her: AUNT FLUFFY.

She Signed Many a Letter: FLUFFINA.

Her sister Edith and Close Friends called her: FANNIE.

The English called her: MS. BURNETT.

During her very brief second marriage she was: FRANCES HODGSON BURNETT TOWNSEND

She Penned Most Books Under: FRANCES HODGSON BURNETT

But was known to also use several Pen Names: “THE SECOND” AND OTHERS.

Behind her Back I am sure were other names: THE PRESS & GOSSIPERS WEREN’T ALWAYS KIND.

And my family today calls her FHB or just plain FRANCES.

NAME HISTORY & SAY WHAT? (don’t call her Fannie in England!)

I also found some FUN FACTS on Nameberry about the name Frances:

“Frances, a soft and gentle classic, last popular a hundred years ago, seems to be on the cusp of a possible revival, along with other such neglected quiet and serious names. It’s been chosen in recent years by such stylish parents as Kate Spade. This year, Frances was Number 602 in the USA.

Traditional nickname Fran feels a bit bland and Fanny, though possessing some eighteenth century charm,  is unusable in Britain and Australia where it is slang for female genitalia.

I will be filing all of that under… “Huh…who knew?” and reminding myself to never call her Fannie in front of the British!

And as a prolific writer, she clearly had a thing for names too, creating colorful characters like: Sir Marmaduke Maxwelton, Anthony Dart, Griffith Donne, and Glad…ensuring that you didn’t forget them once you put the book down.

Frances herself was a truly unforgettable character and I can’t wait for you to get to know her by name.

And, I can’t wait to get to know YOU by name too!

Yours Truly by One Name or Another,

Do you have as many names/nicknames as Frances?  What are some of the fun ones?

I’ll go first: I am called “Carrot” by many of the little ones in our friend tribe and growing up my neighbor friend’s father always called me “Keri-Joe-Bob-Fred”…both names always bring a smile to my face and good memories to my heart. 🙂