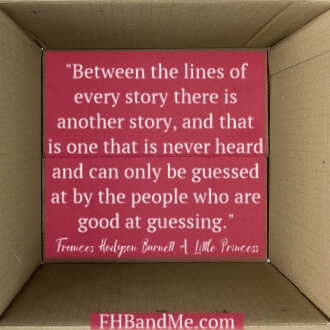 “Between the lines of every story there is another story,

and that is one that is never heard

and can only be guessed at by the people who are good at guessing.”

I was just 3 years old, toddling around our two story home when I discovered the box. It was the sort of house one could get lost in, and a box was just another exciting thing for me to explore.

My Granny and Grandpa, after years of bitterness and fighting had finally decided to divorce. This box marked the finality of their life together with a thud on our “welcome” mat. Had we only know that this box would mark the beginning of a new relationship and for me a journey of self-discovery, perhaps we would have at least stopped down to make the ceremonial “drum-roll sound” before we opened it.

This plain brown box, sealed with plain brown packing tape, that neither of them wanted in their new post-divorce lives, was now ours, forever. And inside, was Frances.

So, piece by piece my mother laid her life out on our oval mahogany stained dining room table. As her story came to life on that table…the questions were surely building inside my Mother: “Why was she in a box? Why didn’t my mother tell me about her? Or my grandmother?” Because, from the looks of the dining room table that day, it seems that Frances, my great-great-grandmother was a pretty big deal.

Oh, I guess I should tell you who Frances Hodgson Burnett was to those outside the immediate family. She was a VERY famous author of over 50 books, plays and short stories including such works as THE SECRET GARDEN, A LITTLE PRINCESS, and LITTLE LORD FAUNTLEROY. As if that wasn’t enough to impress you, she was fearless and sued a guy for misusing her work which was INSTRUMENTAL in making changes to the copyright laws to protect today’s authors and their work.  She’s such a big deal that part of Central Park is dedicated to HER.

AND THEY NEVER TALKED ABOUT HER….crazy right? And they put her in a BOX! I keep playing over and over in my head the famous line from Dirty Dancing… “Nobody puts Baby in a corner!”…NOBODY PUTS FRANCES, author of the Secret Garden, IN A BOX! But they did.

I wish I could tell you that my Mother took the time to ask why, but she didn’t. And the family that didn’t speak about her are all no longer alive to tell the fascinating (I am sure) story of how and why Frances life was taped shut and shoved in an attic for most of my Mother’s life.

Luckily, because she was such a big deal, talented researchers and authors all over have written biographies about her (with the help of our little brown box). Armed with this information, and my bloodline gut…I have two running thoughts on the box: Child of a Famous Person Syndrome and the Black Sheep That Clothed Me Theory.

Child of a Famous Person Syndrome

My Granny’s father was Vivian, Frances’s only living son, as his brother Lionel died at just 15 of consumption. Vivian, my great grandfather, was LITTLE LORD FAUNTLEROY. End of story. Little Lord Fauntleroy was loved by mothers all over the US, but hated(not sure this word is strong enough) by most boys who were forced by their crazy mothers into “nickers”, starting fights all over playgrounds in the 1950’s. If a boy was called “Little Lord Fauntleroy”, it was like calling them a SUPER SISSY. (In Davenport Iowa, an eight year old boy burned down his father’s barn in protest at being dressed like Little Lord Fauntleroy) Ironically, my father was one of those boys and ended up marrying the great granddaughter of the woman that caused his torture as a child. I chuckle a little every time I think about that.

Frances was also the highest paid Author (not woman author…but author) of her time. Royalties from one book alone built, paid for and furnished her large home in Long Island. And so her books made her an “A LIST” celebrity that everyone wanted to know about. The press followed her everywhere. If she were alive today, I am sure her face would be all over the magazines in the supermarket isle…and she gave them plenty to talk about.

But Vivian too, aka Little Lord Fauntleroy was subject to this interest from the press, despite his best efforts to make a life of his own. The headlines on the day he died, rescuing (3) people heroically from a sinking boat,(read “Little Lord Fauntleroy”, dead at the age of 55).

I think once Frances died in 1924, when he was 48, that he did his best to live a normal, non-Little Lord Fauntleroy quiet life with his wife and two daughters.  And once he was gone just a few short years later, my great-grandmother Constance had her hands full raising my Granny and her sister, my Aunt Dee Dee. They simply cashed the royalty checks, all bought homes on Nantucket Island, and tried to live their own lives, away from the expectations that come from being the close relative of someone famous.

There are so many children of famous stars today who change their names so they can “Make it on their Own” and not be viewed through the “famous parent lens” by others.  I think in a way, this is partly why Frances was put in a box. It was her life in that box, and now it was time they lived theirs.

The Black Sheep That Clothed Me Theory

Frances, for a modern Victorian woman, was NOT your average modern Victorian woman.  A woman had her place…and Frances was not going to stay in that place for even one minute. A woman was to be married…she was divorced (twice) and had many alleged affairs. A woman was to stay at home with the children…she was apart from them writing for most of their childhood. A woman was not to be loud, outspoken, or bold…she was all three. She smoked and she dyed her hair, both no-no’s! And to top it all off, she wrote about things “unsavory” for a woman to discuss…and even used foul language. Today, most of these things wouldn’t even make for a good trashy novel, but back then…this was a big deal. And despite her success and subsequent financing of the entire family for most of their lives, it is possible they were secretly ashamed of her and her unbecoming behavior.

It’s interesting to note that Frances WAS talked about a TON by her brothers and sister’s families…and current living relatives lovingly referring to her as “Aunt Fluffy”. And when learning that she wasn’t talked about in our family…they were completely baffled!

Even if I am “good at guessing” we will never really know why she was put in that plain brown box. But this I do know… Frances IS my great-great grandmother, a fact that I plan to SHOUT FROM THE ROOFTOPS for years to come. (Despite her use of the S word) My hope is that through FHB & ME, and with your help, she will live forever, just as she lived her life, “OUTSIDE OF THE BOX”.

No longer lost but found,

LET’s CHAT ABOUT IT:

Do you have a guess as to why she wasn’t talked about in our family? Would love to hear! Comment below.